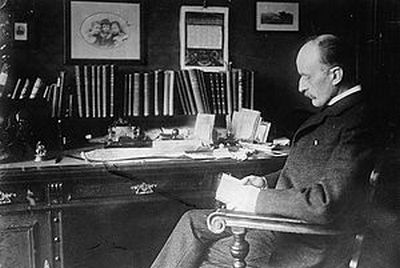 Max Planck: so much to discover

The name of the greatest German physicist Max Carl Ernst Ludwig Planck – or just Max Planck – is nit known to many people nowadays. To be more exact, it is known only to people who was interested in physics not only in order to learn the next incomprehensible paragraph in the physics textbook. Nevertheless Max Planck firmly occupied his place in physics near such more famous scientists as Albert Einstein or Isaac Newton.

Since early childhood a future great physicist revealed outstanding talents and inclination to very different fields of science. He was interested in everything: in music and painting, in philosophy and theology. Such a comprehensively talented and gifted person had difficulties in making an exact and definite choice of his future activity. He was interested in so many disciplines and he was able to show his worth in many of them.

But Max Planck didn’t hurry to choose, he understood that he wouldn’t be able to reach some impressive results in several fields of science.

“Stop thinking!” – grandfather and great grandfather told him (they were professors of theology in Gottingen). “You should become a theologist and there is an end to it”.

“Don’t listen to these old fools” – father persuaded him. “Learn law and become a lawyer – follow my footsteps”.

Whether Planck, in spite of enormous quantity of talents, had insufficiently good hearing to hear relatives’ advice or he had little respect to their professions, but he chose physics. His choice, naturally, didn’t please neither his father nor his grandfather and great grandfather. It should be noted that this choice spoiled the relationship with men in three generations of this family. It was another Planck’s talent – anyhow, not every person can do it.

But the choice was made and the future qualified physicist went to the Munich University where he said that he wanted to learn physics. A respectable professor of the university, a famous physician and mathematician Philipp Jolly, strange as it may seem, displayed some skepticism to the young man’s desire. He said: “It’s useless. Physics’ studying has been practically finished. Everything that can be discovered has been already discovered. You will have to fulfill only some insignificant gaps”.

It should be noted that professor Jolly acted against his conscience, as among “insignificant gaps there was ultimate incomprehension of gravitation’s nature. And this incomprehension, by the way hasn’t changed even till nowadays.

Planck answered to the respectful professor that he wasn’t interested in discoveries. He only wanted to study physical field to his heart’s content. “It’s your choice” – the professor gave up.

Nobody knows what urged Max Planck on making the chain of wonderful and fantastic discoveries, but it’s probably was boredom. Actually, if everything has been discovered and studying the field bored him, what to do?

It is possible that boredom helped Max Planck to become a founder of quantum theory which overthrew the known physics. Planck’s theory proved that all former discoveries in physics, to put it mildly, weren’t right when concerning elementary particles. And now owing to the works of this great person, physicians of the whole world have a lot to discover. And will have for many decades in the future.