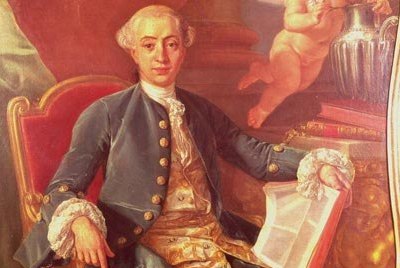 Love attack in the dark of the night. Giacomo Casanova.

The name of the Italian writer and adventurer Giacomo Casanova has become a nominal noun. What’s more, nobody knows which books the author, this bright Italian figure, wrote, and nobody cares much about those books. Everyone is interested in another side of his personality – the one which full of passion, frivolity and seductiveness. Every woman (even though she might assure with convincing air the opposite) dreams of experiencing the charm of that hero-lover who became famous for his romantic affairs, on herself. And speaking about men, they just couldn’t but admit that they secretly wanted to hear such a cherished and pleasing their self-esteem phrase: ‘You are just like Casanova!’ at least once in their life.

Nevertheless, Giacomo Casanova, besides his manly boldness, had quite a bright and brisk mind, could draw interesting and shrewd conclusions, and he could discourse upon some deep and sophisticated things. Obviously, thoughts of love and passion took a lot of his time, he ponder over such questions as ‘what is love?’, ‘what is it given for to us people?’, ‘how does it come’?’ and actually ‘why does it fade away after several hot hours of love delight?’.

Reflections and discussions about this matters are quite interesting and encouraging even nowadays, but in this case we need to draw such a conclusion concerning love: there is a vivid analogy, the analogy between love and war – ‘Love is like a war company’! Yes, as a matter of fact, that is true! Giacomo in his reflections often used to resort to this comparison, convincing his interlocutors that all is fair in love and war. All you need in a brave battle is honour, and all you need in love is honour too! His friends shook their heads and asked Casanova: ‘And what about friendship? What if the object of love is your friend’s spouse, and the sanctity of the marriage ties prevent you from taking steps?’ The Venetian lover responded without fail: ‘I don’t know anything! There are no friends in love!’.

It is worth mentioning that Giacomo Casanova was quite aware of the hostilities matters. We don’t know what helped him to become an expert in war – either his friendship with the commanders of different countries or the talent given to him by nature. Anyway, Casanova knew the tactics of warfare with opponents perfectly well and he succeeded in transferring these war tactics to the manner of communication with the weaker sex. He always and without fail chose attacking in this matter. The attack which is ingenious and quick as lightning (the more so because morals and manners of that time allowed men to act in such a way).

And one day his best friend count de la Tur d’Overn (evidently having yielded to a sudden fit of emotions of friendship and forgetting all about the ‘reputation’ of Giacomo) introduced Giacomo to his new young and beautiful lover. Unfortunately, there is no mention of her name, but her breathtaking charms at once set fire full of passion and storm of love emotions to Giacomo.

Giocomo had no opportunity to be with his new object of his restless passion, so he just didn’t know what to do with himself. He felt that he had to begin a war campaign in order to conquer his friend’s beloved, but he had better delay the campaign for seduction under the circumstances. But Giocomo was born under a lucky star: Giocomo, count de la Tur d’Overn and his charming lover were to take a trip in the same carriage! The famous Italian lady-killer just couldn’t miss such a great opportunity so, having taken the seat next to the beauty, he got ready to begin the attack.

Some time later after breathless expectation, it got gloomy inside the carriage and the darkness of evening twilight added to the gloom. Giocomo Casanova considered the circumstances most favourable, so he went into action hoping to win the battle. Groping for the hand of the object of his passion, he put into his actions all the passion he had, all his ardour, talent and experience. A soft hand of the count’s lover got acquainted with every detail of the Venetian’s physiology just in several minutes. The victory seemed close and Gicomo Casanova’s imagination already depicted celebration fireworks, which designated his forthcoming and heroic win. Unfortunately, a tender hand of a nice lady turned out to be the hand of count de la Tur d’Overn!

Nowadays it might seem a little bit strange, but the count had a hearty laught at Giacomo’s failure and didn’t take offence on his best friend at all. As a matter of fact, being a good strategist and commander, he just realized clearly that business is business and also that all’s fair in love and war.