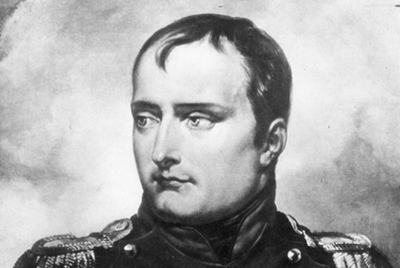 Emperor Napoleon I often made some actions which were inexplicable even from the point of view of his generals. Late at night he could slip his cloak over the shoulders, put on his famous cocked hat and without any convoy went to inspect posts.

Once during this inspection the emperor saw a sentry who was sleeping on his post. Military time regulations were very strict, but fair: the punishment for such breach was an immediate field court and shooting. A sleeping soldier on his post exposed to danger not only himself, but his companions’ lives which he was guarded. But Napoleon, as always, behaved very paradoxically. He took a heavy gun of the sleeping sentry and stood on the post. When some time later a guard commander came with changing of the guard, he saw to his surprise and horror that the sentry was peacefully sleeping under the bush and his place was occupied by the emperor.

“Stop! Who’s there?” – Napoleon asked according to regulations, taking the gun from his shoulders.

Taken aback from such view soldiers even broke formation watching the emperor on the post. The guard commander some time later collected himself and answered: “Changing of the guard! Go off duty!”

“Gone of duty!” – Napoleon reported soldierly and then said in absolutely other voice: “Don’t wake the soldier! Let him have enough sleep.”

There wasn’t any punishment for the sentry.

When Norman Copeland was writing his famous book “Psychology of direction” he repeatedly took examples from history. Particularly when he was explaining methods of group’s rallying around the leader he gave this case from Napoleon.