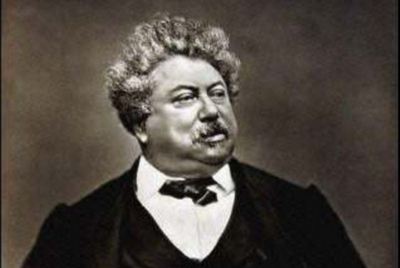 How to marry the hell of a woman – Alexandre Dumas (father)

Everyone is used to seeing famous writers as people you can rely on, the ones leading a life full of piety and decent deeds. In fact, a lot of celebrities are remembered by their nobility. There were those who were killed in the heat of a duel. There were people who set their serfs free and those who struggled furiously against autocracy, tyranny and the price increase of buckwheat.

But still there are some exceptions in the world literature. We are acquainted with biographies of much more vivid characters, the ones who are known by their grand notoriety, love affairs or scoundrel’s behavior. Alexandre Dumas the senior is surely among this kind.

Alexandre’s witty arguments in hot discussions with his arrogant colleagues, sybarite manners and plenty of pretty women he had will go down in history forever. He never drank alcohol or even coffee, neither did he smoke; he was all obsessed with two main things in his life: writing novels and being involved in passionate love affairs.

Despite Alexandre’s lax life, he was not a mere Don Juan who wrote genius novels and in the meantime seduced any young lady he came across with. He actually loved his numerous lovers, loved sincerely, without a shadow of a doubt. He spent giant sums of money buying expensive gifts for them. The strangest thing is that Dumas really wished he were able to date all of his women at once or at least be good friends after the end of relationship.

It is common knowledge that fate is unkind and you shouldn’t tempt it. Fate had to square accounts with Dumas, so it played a witty trick with him: a great novelist’s marriage was accidental, and his wife was far from being a decent woman. Ida Ferrier managed to pass by loads of admirers and worshippers. She is given credit for what she did: Ida became the only woman Dumas had ever married. Memoirists like to describe this lady as a woman who was self-seeking and hard to please. She devoted her life to buying dresses and provoking never-ending quarrels with her beloved. Still we’ve got to admit that there are memoirists who describe Ida Ferrier as a kindhearted and quite adequate woman.

The famous writer first saw her when she was rehearsing in a play he had written ‘Theresa’. The opening night became a huge success, so young Ida drunk with joy threw her arms round the dramatist’s neck and exclaimed ‘I even don’t know how to thank you’. Ida Ferrier was a young blond with snow-white skin and beautiful eyes, so Dumas instantly found a way for Ida to show her gratitude. He was a man in the prime of life and there was no harm in enjoying the charm of a young naïve girl.

She spent precious several years of her mediocre life conquering her new lover, who never showed faithfulness. Just like a soviet worker, her mission was completed in five years. Her dreams came true and in 1836 Ida finally moved to Alexandre’s place.

In the age of 37 something really nasty happens in life of great writers. It seems to be a sort of tradition. Alexander Pushkin was shot in a duel, quite a bad thing happened to Dumas at this age too. His own patron let him down, though it is true that it was in fact Dumas’ fault after all. He was a guest at a ball and there he took a false step when he made up his mind to introduce Ida Ferrier to the Duke of Orleans who was a descendant of the king of the French, Louis Philippe himself. The Duke decided to please his self-esteem and he dropped in a inadvertent way ‘I’ve got no doubts, my dear Dumas, you could only introduce me to your wife and nobody else’.

Ida Ferrier was a smart woman, besides it doesn’t take much intelligence to understand such a broad and obvious hint. That is why in no time she became the hell of a woman and his wife at the same time, and the writer had to put up with it.

Naturally, the reasons of that marriage aren’t known for sure and some of the memoirists are still arguing about this point.

According to the first version, Ida found her happiness owing to a mere blackmailing. Using the help of an accomplice, she bought all bills of debt belonging to her beloved. Armed with the piles of bills, she gave Dumas not a very reach choice: either he goes to jail because of the default on debt or he could make a blond hell of a woman his spouse for the rest of his life (surely, she was offering herself). It was left for him to make a decision. Anyway Dumas ceased to feeling himself free as the bird, he wasn’t his own master anymore. The writer chose marriage, perhaps he took into consideration that Ida was a little bit prettier than an average prison-keeper.

There are also those who support another version of what really happened. They believe that marriage was a big step for Dumas as he needed to build a fine reputation and have a decorous image. Everyone knew he dreamt of entering the Academy. Besides, Ida was a much more convenient choice than his another current minion- Belle Crelsamer. The woman in question had already two illegitimate children (and Dumas was deeply involved in the conception of one of the children). Ida, on the contrary, had a reputation of a great housewife and though she appeared to be a heavy burden for men, she was infertile and it did matter for the light-headed and unstable writer.

The third version sounds funny, but it fully reveals the true nature of Dumas the senior. One of the writer’s numerous friends asked him once ‘So why did you marry that horrible woman?’ and he answered earnestly and ingeniously ‘Well, my friend, I did it to get rid of her’. Naturally, this sudden marriage was a shock for the whole Paris, to say nothing of the novelist himself. But everything seemed to have a good (or at least a logic) ending: in 1844 the marriage of the writer and the girl who always seized opportunities finally came apart. After separating with her, the playwright continued his love affairs, making the whole bunch of illegitimate kids. Memoirists estimate the result of his lovers’ fertility really high: the number of children is nearly five hundred!

This man led a life full of difficulties and surprises. In his full and eventful life he made a lot of mistakes, but he never felt sorry for anything. Unfortunately, the life of late years of the great jester and hooligan was not so exciting. He died in destitution, ripped off, deprived of all his fabulous wealth.

But such an annoying trifle as death couldn’t break Dumas’ unfailing cheerfulness and liveliness. Shortly before his death he told his son, Alexandre Dumas the junior ‘I’m reproached for having been wasteful. I came to Paris and there were twenty francs on me. – he paused, pointing to a gold coin on the mantelshelf and went on – ‘And look over here , I have saved them!’.