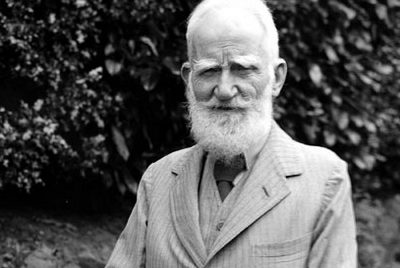 At the beginning of the ХХ century there were no playwright more popular in Europe than George Bernard Show. He had quite an outstanding personality, and he often could easily shock common citizens by his creative work and by his style of life as well. This extravagant genius at a mature age became a full vegetarian and thus he visited only a limited number of restaurants in London. But it was great honour for a restaurant to have Bernard Show as a guest, and restaurateurs tried to receive him cordially and please him as a guest, fulfilling any of his wishes and whims no matter how strange and nonstandard they were.

They say that once, as Bernard was preparing to go out with his wife, Stella Patrick Cambelle, he decided to try something new and go to have dinner in one of the London restaurants. On his way to the restaurant that he’d chosen the playwright was thinking over one of his concepts for the new play . When they were leaving the house, his wife asked him what she should wear and the playwright, as he didn’t want to be distracted, responded to his wife: ‘My dear wife, wear the silence, please, it becomes you very much!’. Stella was accustomed to her husband’s quaint character, so she dressed up hastily and they set off. On his way to the restaurant Bernard was silent and had very concentrated looks. There were not many people in the restaurant, but Bernard couldn’t concentrate fully because of loud orchestra which was playing popular melodies without stopping. The members of the orchestra tried to humour the great playwright, so they kept playing potpourri of performances, which were directed on the base of Bernard’s plays. Show tried to keep patient for quite a long time, but then he finally called a waiter ans asked him: ‘Tell me, darling, what kind of musicians are playing today?’ ‘Oh, this is one of the best orchestra in the city, Sir! They are true virtuosos.’- answered the waiter proudly. ‘So, they can play anything?’ wondered Bernard. ‘Of course, Sir! Do you want them to play something special for you?’ the waiter asked. ‘Yes, I guess so’ answered Show and handed to the waiter a folded piece of paper with something written on it. ‘Let them play this thing for me!’

The waiter took the paper and gave it to the members of the orchestra. Some time later, they were gone and deep silence filled the restaurant. Bernard Show had a peaceful dinner and when he was brought a cup of coffee his wife couldn’t but wonder what was there written on the paper which he gave to the orchestra. ‘I asked them to play a party of poker’ he answered with a smile on his face. ‘Why did you need it, Bernard?’ ‘I really wanted the restaurant to be silent, but I couldn’t just ask them to shut up’.