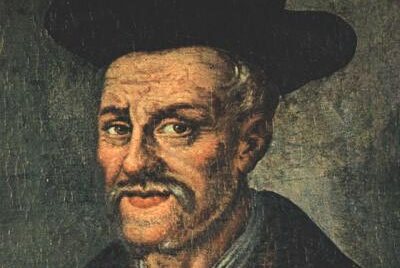 Francois Rabelais. Poison as a ticket to Paris.

We all remember that the era of Renaissance was like a shiny ray of light in the doleful realm of the European way of life. The figures of that time were a perfect match for the era – they were full of life, gaiety and even a little bit of mischief. For instance, we can take Francois Rabelais as a vivid example.

Once Rabelais had to move from Lion to Paris. Unfortunately it was a difficult period in this great French satirist’s life – he was at an ebb financially. That was why the man of great mind found an excellent way to save some money, and have some fun at the same time. He took three paper bags and filled all of them with sugar. Then he signed them in turn: ‘poison for the king’, ‘poison for the queen’and ‘poison for the dauphin’. The writer left fake poisons on the windowsill of the hotel room he rented and started to wait patiently.

When it was the cleaning time a maidservant came to clean the room, found the bags and read the horrible inscriptions on them. She wasn’t confused by the deliberate frankness of the inscriptions, and so she headed straight to the owner of the hotel in order to inform him about the sudden finding. The owner instantly informed about a suspicious lodger those who were in charge of the criminal matters. Soon severe men came for Rabelais, took him by the arms and convoyed him to Paris.

When the prosecutor brought an accusation against the ‘criminal’, presenting proofs in the form of the bags, Rabelais ate the ‘poison’ and explained to him his witty plan. The story spread like wildfire and it became the most popular joke among the grand people in capital. Rabelais gained even more popularity after this incident.