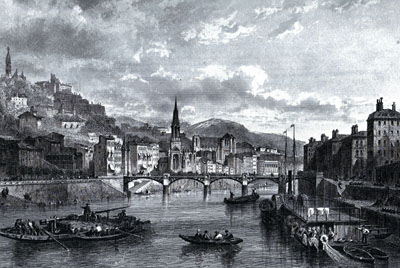 Destiny of a sensation. Emmanuel Domenech

Abbot Emmanuel Domenech, a geographer of XIX century, a missionary and an expert in American Indian writing, was a man of outstanding intellect and education. However, even such people sometimes can make mistakes.

In 1850 the keeper of the Arsenal library in Paris, Paul Lacroix, found a big box with an intricate lock on it. It was interesting that the keeper found that box on one of the shelves of the library. Fairly thinking that the case needed certain investigation, Lacroix broke the lock and found an old manuscript inside the box. The manuscript was spoiled by water, and as for the text, it contained a lot of pictographs and mysterious signs. The note in the library catalogue said that the script was called “Book of savages” and was received by the Arsenal library in 1785 from a private collection of some marquise. It was also mentioned that the “Book of savages” was more than 100 years old.

So, Lacroix counted that the manuscript was at least 200 years old. In order to reveal the mystery, he invited abbot Domenech, who had spent a lot of time in North and South America and was known to be an expert. So, Domenech examined the manuscript and found out an interesting fact that part of the sign in the manuscript was absolutely unique and had never been seen in any other sources. The abbot fairly concluded that the “Book of savages” was a book of Iroquois’s writing, who had already been accustomed to Christianity. He made that conclusion judging by the letters of Latin alphabet, which were used in the manuscript. However, the abbot carefully added that his conclusion was tentative and the manuscript demanded further examination.

Soon after that abbot Domenech reported about his incredible discovery. The “Book of savages”, as he thought, was a story about the great migration of Indian tribes, relations and everyday life of Indian and also about coming surprising invaders with white skin and conversation into Christian. But the most amazing fact, discovered by Domenech almost in the end of the manuscript, was that Iroquois had phallic cult.

Domenech’s work about the “Book of savages” was highly appreciated but French scientific society. There were suggestions to propose Domenech as a candidate for the French academy prize. But the desire to pass ahead of American researches roused French to the idea of publishing the abbot’s work. In addition to that the text was supplemented with illustrations of the original with additions of copies of Indian pictures on the stones of Grand Canyon. The book had very long headline and was published in 1860. Moreover, French minister of foreign affairs, count Valevsky, thought that it would be good to make a public speech before publishing. After praising the author’s deed, he announced that france acted like a kind teacher of other peoples.

Probably, the speech was most offensive for German people. The published book had response in a surprising reproof in a booklet of one Dresden bibliographer. The booklet, which had only sixteen pages, was published one year later and was called “About the book of savages in the light of French civilization”. The content of the booklet caused real scandal as I proved that the unknown to abbot Domenech “signs” were not a syllabic writing but simply Gothic German type. That kind of type had never been used in France that was why the abbot didn’t recognize the letters. And as for the pictures, which had been decoded by the French author, they were just a pupil’s scribbles, as the German writer said. In its finishing variant, the verdict said that the presented manuscript was just a scribbled pupil’s exercise book, who, judging by the pictures, was once strapped by his teacher. The conclusions were supported by German press. In addition to that the newspapers authors didn’t forget to laugh out the French abbot and the minister.

After that no objection and no new research of abbot Domenech were taken into account, especially after the booklet was published in France by opposition of the French court. The scientist was not able to recover after such a strike. Hу left for Lion and led a secluded life-style there, working as a parish priest.