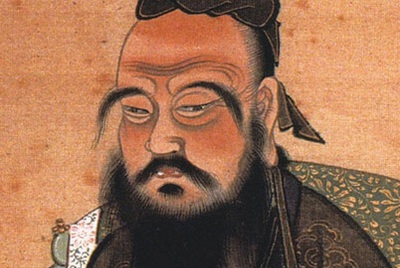 Confucius and the beggar. The philosopher’s doubts.

The great Chinese philosopher Confucius is well-known as the author of a harmonious philosophical system which since ancient time and until nowadays have formed the base of the Chinese ideology. It can be called the kind of religion with its own numerous followers. Confucius strongly believed that human society should be strictly systematized and remain in the state of permanent collateral subordination: the younger submit to the elder, the inferior to the superior, the whole community to the governor, the governor to the highest will of God. That is the way for the Celestial Empire to thrive vigorously and keep prospering.

The philosopher had a lot of disciples and followers, which were by the way quite successful people as they had very profitable posts in the officials. They all were satisfied with Confucius’ concept of the society, and the Emperor himself was especially eager to show his consent on this matter. Nothing could ever make the great Master doubt the rightness of his postulates.

In fact, at that time there was another great and famous philosopher named Laozi who believed Confucius’s doctrine was something only a slave could accept. As a matter of fact, a human being is born full of free will and their freedom is the only true value in their life. Confucius grew irritable when hearing these words, and he just kept on insisting on the opinion that conscious subordination was much more useful for a man.

One day, when Confucius was walking around the neighborhood, surrounded by his disciples, he took notice of an old man who was collecting spikelets which were left after harvest on the rice field. In the China of those times this kind of activity was thought to be humiliating. Only beggars and ill-fated people wronged by life could collect spikelets. The old man on the field was singing loudly and he seemed to be absolutely happy and pleased with his life. Confucius was quite amazed, so he immediately came up to him with all of his disciples following him.

‘What are you so happy about?’ he asked the old man’. ‘I’m happy about the day war and full of sunshine, and I’m happy about these skilelets which left for me on the field.’ ‘Haven’t you earned anything in your life? You could work and live with dignity and instead you collect garbage’ uttered the philosopher. ‘I’ve collected spikelets my whole life and it’s enough for me – I earn my daily bread this way’ responded the old man merrily. ‘Oh, but what about your poor wife?’ wondered Confucius. ‘I’ve got no wife’ replied the old man even more happily. ‘Your poor little kids’ grieved Confucius. ‘I’ve got no kids neither, I’ve never had any’ the old man kept smiling cheerfully. ‘Who do you serve to?’ asked the philosopher, obviously embarrassed by the old man’s answers. ‘You’ve got neither family nor kids and you lived your life without them’. ‘I don’t serve to anyone’ the old man answered joyously and after this conversation he peacefully continued collecting spikelets.

The great philosopher stood there puzzled for time, pondering over the things that old man told him, and his disciples stood at a respectful distance deferentially not daring to interrupt the philosopher’s deep reflections.

In fact he thought what a fool he was. During his whole life he did only those things that people surrounding him expected him to do, he pleased his father, so that he wouldn’t beat him, he pleased his teachers in order to get rewards and be praised, he pleased his superiors in order to get a promotion, and now he was pleasing his family, disciples, the Emperor. He had never acted the way he really wanted to, because of some higher motives, which had nothing to do with his own personality. Finally, he even created the whole philosophical system so that he could control that everyone including himself was still in the captivity of somebody else’s interests. Finally, Confucius uttered with hidden envy in his voice: ‘Well, that old man knows what life is about. He understands a lot of things in life’. Then he remembered about his disciples surrounding him, so he turned towards them, frowned and added: ‘A lot, but not everything.’

Nothing could weaken that orderly and harmonious philosophical system created by Confucius. Everybody living in the Celestial Empire should strictly obey one rule: the younger should submit to the elder, the inferior to the superior, the whole community to the governor. The governor should serve to the highest will of God. And who the old man should serve to? Well, maybe there was no old man.