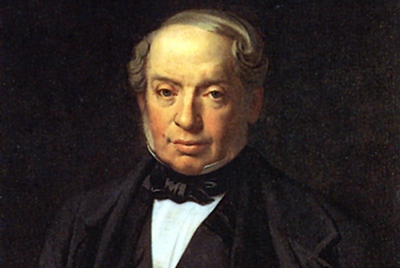 Once a young actor who lived in Paris fell hair to a beautiful ancient tea service from his mother. The young man made up his mind to speak to an antiquarian in order to get to know the value of these antiques. An expert estimated the inheritance at half million franks and then he made a joke telling him that only Rothschild himself could afford such tea service (as a matter of fact, Rothschild is a dynasty of extremely successful bankers and public figures).

Soon after visiting the antiquarian the fellow headed to James Mayer de Rothschild. But before the visit he made himself up as a very old man. The baron examined the tea service which the ‘old man’ brought to him and said he was ready to pay half million franks for it. The old man had a counter offer. The baron was to pay 40.000 franks a year every year until he died. Rothschild thought it was an advantageous offer and so he agreed. Thus, the actor came to Rothschild and got his payment every year.

Five years passed. The baron once asked his servants whether the old man was still alive. When they informed Rothschild that he was indeed alive and came for his ‘pension’ regularly, the baron asked to bring the old man as he wanted to talk to him. ‘You have got very strong and healthy nature!’ he told the old man with the notes of surprise in his voice when they met. ‘How old are you I’m wondering? – ‘I’m almost twenty-eight’ answered to Rothschild the fake pensioner honestly and took off a wig and false beard.

Rothschild wasn’t angry at a cunning young man. On the contrary, he liked this knavish performance so much that kept paying the actor the agreed sum of money.