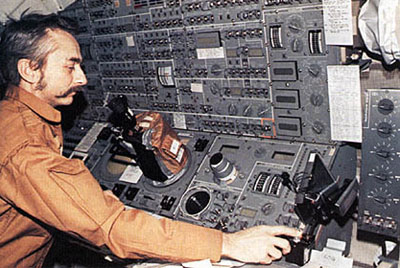 Owen Garriott, a physicist, having a doctor degree, who was an American astronaut, firstly got into outer space in 1973. And he was not only a pilot and a scientist in that expedition. He also joined for the second expedition, working at orbital station “Skylab”. He made a lot of research, and went out in space for three times. SO, he seemed to be a very serious and solid person. However, Garriott managed to make a joke while they were at the station. And that joke is still considered to be the best one among numerous cosmic stories. The practical joke, made by the scientists, can n=be added to annals of astronautics and also into the humor piggy bank of our civilization.

Garriot prepared his practical joke in advance, while he was at home, on his home planet. But the astronaut fulfilled his idea only when they reached the station, at the moment they were communicating with Earth. The flight-control center communicated with “Skylab” regularly and all the voices of astronauts were familiar to the operators. So, it was natural that officer Robert Crippen, who was on duty that in the center that day, was not expecting any tricks.

Fortunately, Crippen was not standing but sitting at that moment. But because of the shock he felt he could hardly speak. After a long pause he asked hoarsely:

Crippen catch his breath and asked with hoarse again:

– Helen? You.. And what are you doing there? On the station..

– Bob, I’m cooking for guys, – explained the woman’s voice. – They haven’t had home food for two months already! Don’t you worry, I brought the freshest food!

For a few more minutes Crippen’s heavy breathing could be heard through the transmitter and then the session stopped abruptly. Evidently, the miserable operator hurried to his psychoanalyst..

The nightmarish visit of the astronaut’s wife to the orbital station could be explained quite simply. Owen Garriot asked his wife to make a recording of a few phrases with a Dictaphone. All the phrases were thought over by the joker beforehand. And during the connecting session he was just standing at the transmitter with the Dictaphone in his hands and pressed “play’ in certain moments. However the astronaut didn’t care for the nervous shock of the operator. But this could be simply explained, one could do almost whatever in order to entertain himself, sitting for several week in the station with two companions.

It should be mentioned that Owen remained an astronaut was quite long time, he visited space once again. Later he left astronautics and tried himself in business, which was a much more interesting activity rather than boring researching work..